This week we celebrated Martin Luther King Jr. and spent the day reflecting on the state of our country and where our nation aims to be. As Carri help remind us through a series of quotes, changemakers are those that desire to change the world by gathering knowledge and make the change happen.
This week’s edition is powered by important news that promise to help change the world of education and impact student learning, achievement and success.

Turning the Switch. In a new CompentencyWorks blog, Steve Lavoie discusses his perspective on “turning the switch” to transition to a proficiency-based model. He reports back on students progress with the transition, how to change the foundation, breaking down the compartmentalization of traditional education and how to define a new “proficient”.

Kids in the Pipeline During Transition to Proficiency-Based Systems https://t.co/IHd9DxvzV9 @CompetencyWorks #CompetencyEd #CBE

How Do You Like That Coverage?! MasteryConnect announced they have added one million standards to their platform across all 50 states and DC. What does this mean? The platform now has coverage for all subjects and topics including vocational subjects.

Apple is upgrading iOS for #education in a major way https://t.co/0joMrTasI0 #EdTech10 #EdTech

Netflix & Learn. Netflix CEO Reed Hastings announced he’ll be funding a $100M philanthropic fund solely focused on education-related projects and organizations. The Hastings Fund is founded on the belief that “All children deserve amazing schools” and awarded its first two gifts to the United Negro College Fund and the Hispanic Foundation of Silicon Valley.

University of Innovation. A new venture fund (still unnamed) launching out of the University of California has an eye on innovation. A commitment from the UC System’s Office of the Chief Investment Officer of $250 million will act as the “anchor investor” and the fund will be managed by Silicon Valley entrepreneur Vivek Ranadivé (founder of TIBCO Software and owner of the Sacramento Kings). The primary areas of interest for the new fund are life sciences, technology, energy, agriculture and materials.

Accelerated Market Expansion. CourseHorse, the leading marketplace that helps people find local classes announced they have raised $4M from Red Ventures to further market expansion. Offering over 70,000 classes to 200,000 members nationally the company has earned one of “America’s Most Promising Companies” by Forbes. CourseHorses’ impressive educator lineup has professors from Stanford, Columbia, The New School, and General Assembly.

Using the Playbook. KnowledgeWorks launched a new site and campaign to “elevate the education debate”. The Education Playbook website includes information about topics like personalized learning, student-centered learning and anytime-anywhere learning with recommendations for the federal government on how to support these shifts.

Distancing T-Rex. The recent recession has created an economy where there is still significant underemployment and delayed retirement, which is requiring the need to teach new skills in new industries. In a recent interview, Barbara Kurshan discusses with John Baker of D2L how competency-based learning will serve this new population and change the personalization and pace at which we learn.

Distancing the T-Rex: A Call For #CompetencyEd During a Post-Recession Economy via @forbes https://t.co/QXoKIeaM8G #edtech #edtech10

Personalized Learning Plans. NGLC is highlighting breakthrough models of Learner Profiles and Personalized Learning Plans. The resource helps define each, shares how they’re being used, how they differ from past approaches, advantages & challenges, and implications for teachers & leaders. Naviance also recently released a report on Individual Learning Plans for College and Career Readiness and TechCrunch is discussing research and implications for next generation of mentoring, guidance,and  online and blended learning.

How Startups Are Solving A Decades-Old Problem In #Education https://t.co/lkZ8CZYmAW #EdTech #edchat #EdTech10

A New Reality. Can big data really improve education? AltSchool CEO Max Ventilla knows that in the same way data has revolutionized health, banking, and retail it will empower schools and educators to truly personalize learning for every student. We’ve been long time believers of the potential of data to power personalized learning and have closely followed this microschool movement.

Are Schools ready for the power & problems of big #data? The Future of Big #Data and Analytics in K-12 Ed https://t.co/UEKxJshded #Edtech10 A Unique Moment in Education Changemaking 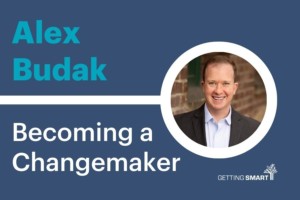 Alex Budak on Becoming a Changemaker Getting Smart Podcast | 21 Insights: Adventures in Learning to Lead