After teaming up with Matt Chandler, Founder and CEO of 4.0 Schools to explore how to create a culture of experimentation in schools, we were excited to see that Matt’s must read insights and leadership were back. This time in an article that was originally published on futureofschool.org on education investing.

When it comes to investing in the future of school, we’re doing it wrong. We’re too focused on scaling things that have already been built and not focused enough on new ideas and the people who have them.

Let’s draw a logarithmic number line to represent the level of investment we invest in a person with an idea about making school better for kids. (I’ll stick with $ to keep it simple, but this could easily be time spent coaching, or giving feedback instead of giving someone cash.) On the far left, we’ll represent small bets — $10 to $100. On the far right, we’ll represent big bets — of many millions, typically to scale something that’s shown promise in at least one community.

Now, let’s break this continuum down into five stages. As a leader’s idea starts to get traction and potential risks are mitigated, we should invest more in what they’re doing, moving them to the right on the line. I believe a sustainable pipeline of leadership needs encouragement at each stage — from the very risky early stages of defining problems and exploring new solutions to the less risky later stages of scaling something that works.

A big reason the tech sector continues to attract talent is their ability to maintain a balanced spread of investment capital across this spectrum. From idea to super scale, there are investors with varying risk tolerances willing to take bets at the stage they prefer.

But that’s not what we’re doing in education… Instead of investing real time and money in the first three stages, we’ve mostly left this to chance, choosing to pile up investment dollars on the right where perceived risk is lower and perceived impact is higher. We too often bless something that’s worked once and lavish upon it tons of money in the name of “scaling what works.”

We get drunk on scale, quickly forgetting that all big ideas were once small.KIPP started as a one-classroom experiment in Houston; Sal Khan was scratching out videos to his niece late at night while he still held down his analyst job. We should be looking for better ways to invest at this stage, when we can actually influence whether someone pursues a crazy idea instead of just settling in to the status quo.

There are signs of hope on the left side of the big red mountain in go to market investments like New Schools Venture Fund’s Catapult, the Next Gen Learning Challenge, and Project XQ (for new school ideas), and New Schools’ Ignite (for new tools). But even these programs assume folks will traverse early stages on their own.

What we should be doing is spreading our investment dollars across all five stages, making many more bets made in the early stages while still making a few big bets at the later stages. We could make thousands more little bets at the early stage for the same money we’d spend on one late stage bet.

This is one of the most effective ways to diversify the people and ideas we’re investing in. If we continue to expect people to get their start on their own, we’re doomed to perpetuate the out-of-balance system of privilege and access that keeps too many people of color and women out of leadership.

Starting early lets us engage with orders of magnitude more people. In fact, this lack of disciplined, early-stage investing is sending a powerful message to aspiring leaders — pick another field if you want to try something new.

Bonus: early-stage investing can happen in any policy environment. You don’t need to pass a charter law, hammer a voucher bill through the legislature or replace a single mayor, superintendent or school board member to run the kinds of small-scale, experiments that might lead to the next KIPP or Khan Academy.

How we could be investing

Here’s a simple proposal for more balanced, disciplined investing — make many more small bets, earlier, but do so in bundles. In each of these stages, bundled investments in more than one leader at a time decreases transaction costs of investing in so many people one at a time.

Investing in groups of people at the early stages does something else — it creates community. This has been the most inspiring, unexpected thing I’ve learned in five years of this early-stage work — people do better early-stage work in community than they do in isolation. It happens to be smart financially, too. Entrepreneurs who take the time to learn how to define problems tend to do better. Key at this stage is building trust with aspiring leaders, convincing them its ok to admit you don’t have a solution yet as you help them build confidence through human interactions with students, families and educators who give them super actionable feedback.

A primary tool for meeting entrepreneurs at this stage is what some have called a career-trajectory-changing experience — Startup Weekend Education. This 54-hour hackathon gives curious leaders a chance to share their ideas and see others share theirs. This lets us get to know aspiring leaders, understand how they work, and start tracking how we can help them as they grow.

In this stage, promising entrepreneurs with well-defined problems get serious about testing solutions.

We serve aspiring leaders at this stage in a program we call Essentials. In this three-day workshop, entrepreneurs identify small groups actual human beings who face the problem they’ve defined and get to work testing solutions with them.

Entrepreneurs leave with a well defined, easily executable pop-up version of their startup or school they can run within a few weeks.

Once an entrepreneur has a fit between the humans they’re serving and the solution they’ve built, it is time to test whether lots of humans have that same need. That’s where our three-month program, Launch, meets up to 20 teams of maturing entrepreneurs each year. Teams planning a new school design run extended tiny school experiments with students and families while tool builders bring the first version of their product to market or start growing in the same way an aspiring chef might use a food-truck.

Investing only in the later stages tells aspiring leaders we aren’t really interested in their ideas, that we’d rather bet on the sure things, the solutions someone built a decade or two earlier. Balanced investing that includes serious investment in the early stages would send a very different message to the next generation: “We want you in education.”

What if every member of the next generation saw education as a field where their ideas mattered, where they might make a career of it solving these very big, very important problems? What if we were there to meet them when they knocked on our door?

What would the future of school look like if we were ready to respond to that kind of interest? I think it’d be pretty bright. 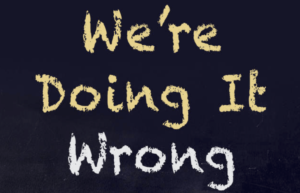