This is the fourth post in a series of ten on categories where I’m seeing strong edtech startup activity. We’ve looked at productive post-sec, informal learning, and credentialing.  A specific subset and application of the trends discussed so far is the rush to coding.  The rash of coding startups suggests that everyone wants to learn to write computer code.
A NYT piece last month said, “The market for night classes and online instruction in programming and Web construction, as well as foriPhone apps that teach, is booming.” The Times names Code Racer, Women Who Code, Rails for Zombies and CoderDojo” but suggests that “at the center of the recent frenzy in this field is Codecademy, a startup based in New York.”
CodeAcademy got the attension of Union Square, who led a $2.5M round of fudning late last year, but Audrey Watters is not a fan.
Some argue that, “Computational thinking is a fundamental skill for everyone, not just for computer scientists,” but for most for many, Al Sweigart is right, ”Nobody wants to learn programming, they want to make cool programs.”  That’s one reason I think General Assembly courses are so popular–they teach coding in a startup context. For example, a class offered today by Happify’s Andy Parsons will explain how to employ best practices for low cost, high-security management of your source code.
Bloc wants to build the “best place to learn to code” with a useful guide, an editor in the browser, and focusing on tasks that quickly build to a live application.  Check out their Launch Festival 2012 video.
As the ASU Education Innovation Summit next week I’ll be moderating a panel on this topic. Panelists include:

All of this activity is exciting, but I think it’s important to remember that these startups are competing against free stuff and search. When I asked a veteran programmer last week how he learned new programs he said, “I just Google it.”

Getting Smart Podcast | Barry Schuler on the Power of Networks 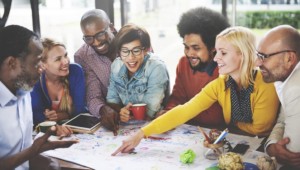 Tom:
Thanks for sharing this post. Computational thinking definitely is an essential skill we need to support and encourage both inside schools and out! The free Scratch programming language and software program from MIT is wonderful to use in this regard. Students learn about X-Y coordinate geometry, variables, and much more while creating animations, stories, games, and more.
http://scratch.mit.edu
Scratch doesn't port directly to mobile devices but it does play in browsers. Game Salad is an excellent environment for game creation without extensive coding that does port to iOS Devices:
http://gamesalad.com/creator