Edmodo is a free easy-to-use social learning platform–Facebook for schools with a lot of free content. “Edmodo provides a safe and easy way for classrooms connect and collaborate, share content, and access homework, grades and school notices.”

Edmodo CEO Nic Borg followed Secretary Arne Duncan at SXSWedu this week.  He announced, “We are opening the Edmodo platform to allow third-party publishers and developers to create educational apps that integrate directly with Edmodo. Apps build for the Edmodo platform will be available to teachers across the US for the 2012-2013 school year.”

The Edmodo blog added, “We’ll also be launching a Teacher-Developer exchange. The site will be a place where educators can connect directly with content developers, to help foster more rapid innovation in k12 content development.”Developers and publishers can sign up for the Edmodo Developer Program at www.edmodo.com/platform. Thirty-five partners are already signed up including several other Learn Capital (where I’m a partner) portfolio companies–Desmos and StudySync.Borg said, “The biggest challenge many education innovators have is getting teachers and schools to become aware of their products. Edmodo’s store, which will officially open this fall, solves their marketing problem.”  “They’ll have a place they can distribute at scale,” Borg says. There are currently a little more than six million teachers and students in 70,000 schools using Edmodo today. Three-fourths of those are in the United States, with the rest in countries abroad. The Edmodo blogalso indicates that the platform is available in Spanish, Portuguese, German, French, and Greek, in addition to English.Like Facebook, the platform is free and easy to use.  Edmodo grew to 6 million users almost entirely through teacher adoption.  The coming app store means lots of new features for the 2012-13 season.For more on Edmodo see stories on Business Wire, Fast Company, Hack Education, and Tech Crunch. 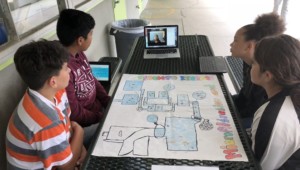