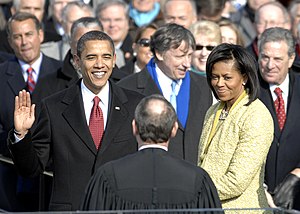 Taking a read through President Barack Obama’s recent comments in Mumbai, you can get the feeling that this is a president who is quite aware that the global marketplace and the international stage is something that is increasingly open to more and more people. Here are some of his quotes, as reported in The Hindu newspaper, during his meeting in Mumbai, India with schoolchildren.

Young people like you can make a huge impact in reaffirming that you can be a strong observer of your faith without putting somebody else down. How you respond to each other is probably as important as any speech a President makes. It’s necessary in a world that’s getting smaller, where more and more people of different backgrounds, race and ethnicities are interacting, innovating and working,” Mr. Obama told students.

Obama even kept a tight focus on entrepreneurialism and ambition, asking that students stay away from pursuing an “unhealthy” materialism.

“I don’t want any young person here to be dismissive of a healthy materialism because in a country like India people are still trapped in poverty. You should be working to lift folks out of poverty. Companies and businesses have a huge role in making that happen. Having said that, if all you are thinking about is material wealth, then that shows a poverty of ambition,” he replied to the question he described as “terrific.”

Hailing the entrepreneurial spirit in the context of materialism, he said, “We should not underestimate how liberating economic growth can be for a country.” It was essential to fulfil people’s needs.