In my role, I am fortunate enough to work with district and school leaders nearly every day. I get to share in celebrating their successes, but also in helping to overcome their challenges.

While every district is different, I’ve noticed that most still seem to have one problem in common: data.

When I listen to these leaders, it’s clear that the issue is typically not a matter of having data or even knowing what to do with it. Rather, it’s making data a central part of every process at every level; or in other words, creating a culture of data.

Building a healthy data culture is still a relatively new – and obscure – concept for many. But one definition in particular has really resonated with me. Whereas data-based decision making is the action of analyzing and reacting to data, leading data expert Dr. Jeffrey Wayman insists that a school or district’s data culture should instead be thought of as “The way things are done when nobody is looking.”

When put this way, it’s easier to see the difference between districts that make data analysis a discrete (and often compliance-driven) task, and those that have instilled a true culture of data through routines and norms.

Now that we have a new way to think about data cultures, let’s consider what it takes for districts to build them.

They see data as powerful, not punitive.

Just about everything in schools today is measurable. But while we have access to more information than ever before, many districts are still crippled by a subtle, though pervasive, fear of data–which is likely rooted in the No Child Left Behind era of accountability.

As one Atlanta Public Schools principal put it in an article from The Hechinger Report, data should be treated like a flashlight, not a hammer. To that end, leaders must make it clear that “It’s not a bad thing if your kids don’t do well. But it’s a bad thing if you don’t do anything about it.”

Therefore, in order for data to be considered part of a district’s culture and continuous cycle of improvement, leaders must ensure messaging conveys the power of data as a tool for growth — and demonstrate it every day. When leaders treat and talk about data as an asset, they set the tone for teachers and catalyze a culture shift.

They enable educators with the right tools.

In describing their goals for data, many district leaders say the same thing: to turn data into insights and insights into action. And while this is a great goal, it fails to recognize the critical first step of access.

Without the ability to access data, educators will never be able to use it.

In an edition of Better Practices for Better Schools, the National Association of Elementary School Principals explained that a districtwide data culture necessitates a districtwide data tool. Specifically, it must offer all stakeholders, from teachers to superintendents, access to the data they need, when they need, and how they need it.

Today, most districts utilize a Student Information System (SIS) or a Learning Management System (LMS), and many have both. District leaders often cite these systems when I inquire about their current data tools. But even though these systems have some analysis and reporting functions, they were not designed to build or sustain a data-based culture. A study sponsored by the Bill and Melinda Gates Foundation to assess educators’ use of SIS and LMS solutions concluded that, when it comes to accessing and acting upon data, these systems do not and cannot fully meet the needs of K-12 educators.

Fortunately, better tools now exist to help educators access data and take action. To find a system truly capable of supporting a data culture, here’s what to look for:

District and school leaders have a lot of responsibilities — in part because they have a lot of influence. This is particularly true when it comes to creating and sustaining a culture of data.

According to a report from the Center for Educational Governance at the University of South Carolina, district and school administrators must put data at the center of everything they do to act out their vision for a data-driven culture.

That means establishing a positive environment in which data is seen as a mechanism for growth, not blame. And perhaps more importantly, it means creating the right structures, like professional development and PLCS, and implementing data tools that fit into workflows at every level so that data becomes a core practice, not just a disconnected task.

To Wayman’s point, districts that have built strong data cultures are, ultimately, distinguished by their routines and norms.

So, take a step back and think about what is actually happening in every classroom across your district when no one is looking. How close is it to what you want to see?

Peter Bencivenga is Chief Academic Officer at IO Education. Connect with him on Twitter: @PeterBencivenga 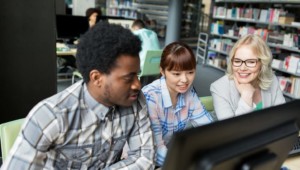