Smith secured a broad base of early support including venture capitalist John Doerr who agreed to cover the overhead. She attracted top talent including Joanne Weiss, Jim Shelton, and Shivam Shah.

Ted Mitchell led NewSchools from 2005 until being confirmed as Under Secretary of Education in 2014.

NewSchools has raised and invested more than $150 million, sponsoring over 300 charter schools around the country serving 157,000 students.

Former Harvard business professor Stacey Childress left the Gates Foundation in 2014 to lead the next generation of NewSchools. Early in 2015, Childress released a strategy update, a major pillar of which is to build a national portfolio of Innovative Schools.

Liz Arney, former head of blended learning at Aspire Public Schools and author of Go Blended, leads the innovative new schools program. Arney said, “We are encouraged by emerging innovations in blended, personalized and competency-based learning that provide students with greater agency and ownership of their learning path and pace, not just in core academic subjects but in all of the skills, mindsets and knowledge they need to succeed.”

The new grant program will support teams that plan to open a new school by 2018 or innovate on key dimensions of an existing, high-performing school. Arney said, “We will partner with teams of educators who take the best of what already exists and further innovate on the student experience in compelling ways.”

Later this year NewSchools will release a formal request for proposal. In the mean time you can fill out a Pre-Application Survey and share information about your plans.

For more information on new schools, check out: How School Districts, Cities, and CBOs Use Microschools to Innovate 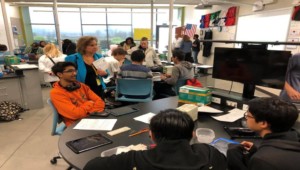