I’ve been a big proponent of kids doing things. Pretty basic concept, right? I think we all are proponents of that. It’s important to turn our consumer kids into production kids. We are a consumer society. We consume a ton of everything. We watch hours of TV each day. We browse the internet day and night. We’re a consumer society. I mean, the smallest drink at Starbucks is called “Tall.”

Most of us educators grew up in a world of consumption that was driven by TV.  The internet is not TV, though. The internet, the modern internet, lets you interact with content. It encourages you to interact with content. It asks you to contribute your own content. It rewards you for contributing your own content. So our consumption is now interactive. Today’s students, Generation Z, understand that. A lot of educators, though, still think the screen is just for one-way communication. Pure consumption. The same educators tend to teach that way, too. They deliver. Students consume.

A phrase that crystallized this for me last week was “project based employment.” I saw that on a future-of-the-workforce website. The phrase sounds scary. Any phrase that ends in “employment” other than “we have a high rate of employment” tends to make me nervous.

That’s not the old model of “everyone works for the company.” This is the Hollywood Model. In this model, someone has a vision for a project, a team is hired, work continues until the project is complete, and then everyone moves on to other projects. Technology is often the new workplace in the Hollywood Model. Managers function like movie directors with their talent being digital stars. The big question is, can we emulate this in the classroom?

Project-based employment isn’t THE reason to do collaborative, project based learning in the classroom, but it’s certainly ANOTHER good reason to do it. This might not be the future that each student faces, but why leave them unprepared?

Collaborative, project-based opportunities are available now for students. Check this out:

A great number of high schoolers from across the country are prepared to step right into this. They come from project-based classrooms. Their nature is to “do” stuff. Could schools set up similar collaborative efforts? Could classroom teachers pull that off? Absolutely.

1. Corporate (or even a start up) has a new project.

2. They identify the key players. Some may be on staff, others will be contracted. In Hollywood, this we be like a studio using its own producer and hiring the director and lead actors. (Don’t forget the screenwriter!)

3. The remaining personnel are hired. Each person has special expertise needed to complete the project.

4. The team works on the project. Small, indie projects are 3 – 7 days. Big projects might last a few years with some personnel coming and going.

5. The project is completed. Most of the workers move on. The full timers move on to other projects in the business and work with new teams.

Future workers will need to be agile and flexible. They will need to market their skills, network, and collaborate. They also need to be able to understand a leader’s vision and follow a game plan without being spoon fed. Think about a science lab. How good are students at following lab directions? I’m thinking not too good, unless the dependent variable in every lab experiment is making the instructor so frustrated that his or her head explodes.

I’m not saying that this is better than what we do now. It might not be the new normal. “Loyalty” is still important to some businesses, and the Hollywood Model doesn’t exactly promote that. If students are prepared for it, though, they can get ahead.

In the Hollywood Model, students won’t be just employees. They will be the CEO of their own Company of One. If their dream is web design, they will be able to do nothing but web design.  Think about the old model. Companies thought that they need a web designer, so they hired one.  There was enough work to keep the new web designer very busy for the first few weeks as the company set up its web page. After that, the web designer basically had maintenance work to do on the site, but not enough to justify full time employment. So the web designer was tasked with doing tech support because, you know, that’s the same thing basically, right?  Five years down the road, the web designer is full time tech support, and does web design (for fun) at night and on the weekends for someone else. People who have a particular skill with enjoy the Hollywood Model.

Going Hollywood In the Classroom

What can educators do to make project-based learning resemble project-based employment and help students prepare for the Hollywood Model? Here’s a short list:

Why are businesses banking on the Hollywood Model? If you believe in statistics and facts and numbers and that sort of stuff, you’ll understand that the things that our nation is the best at in the world is a list that continues to get shorter.  And some of the things that we are best at are things that aren’t necessarily envied around the world.  But one thing that we better than anyone and is the envy of the world is making movies.  We’re the envy of the world.  Nothing is more important than having your filmed viewed and received well by an American audience. 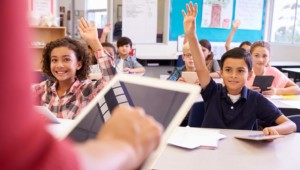