While everyone was at VSS last week, I was at home doing the granular work of drawing the parallel lines between the Digital Learning Now! report and the plot of Footloose. It’s like Pink Floyd’s The Dark Side of the Moon dubbed over The Wizard of Oz all over again. Even better than that, though, I delved into the app store at Edmodo and got super charged at what I found.

What is Edmodo? It’s a free social learning platform that allows teachers to share content and manage projects, assignments, notifications, quizzes, and events. There are seven million Edmodo users in over 80,000 schools. That’s approaching ubiquity!

If you’re teaching in a district that’s not already using Edmodo, no worries. Sign up is free, and you will have your students enrolled in no time. If you’re already an Edmodo user, you have to check out the apps in the Edmodo Store. You’ll recognize many familiar web apps like MangaHigh, Pixton, instaGrok, Rocketfuel, BrainNook, and Desmos.

So why should you get these web apps for your students through the Edmodo Store and not just out on the web? When you get the apps through the store, the apps are integrated with Edmodo’s badges, gradebook, assignments, calendars, and feeds. In addition, they have a single sign-on for students and teachers and back-end analytics for the teachers.

The Edmodo Store has both free and paid apps. Start with some of the free apps, but be sure to take the survey that you will see in the app store to claim $50 credit in the store (not sure how much longer they will offer that).

Remember that Edmodo itself is free, and many of the apps are free, as well. Some of the paid apps are tantalizing “must haves.” Districts and schools should start budgeting for digital purchases and consider giving teachers stipends for digital purchases. Teachers, as well, should look at their own budgets. Consider diverting out-of-pocket classroom expenses on digital purchases. They can ultimately save you money, make your classroom better, and make life much better. (Don’t forget to claim them on your taxes! The purchases, not the students, I mean.)

You’ll find many useful and productive free apps in the Edmodo store. From the Common Core Standards to Class Management apps, you can elevate your game right away. Apps are cataloged into content areas. You’ll find something for nearly any class.

This Cuban Missile Crisis app from Bongo LLP is in the social studies content area: This Macbeth app from StudySync is in the language arts content area: Don’t miss the utilities section in the content area. The Class Management app from Sokikom and the instaGrok apps are my own “must haves.”

Sokikom’s apps allows you to manage your classroom right in Edmodo. Similar to Class Dojo, you can reward good behaviors and reshape negative behaviors. It’s customizable for the areas that you want to monitor or influence. There’s no clipboard to carry around or computer to be behind to manage this app. Reward behaviors right from your smartphone as you walk around the classroom. For this app, you will need to run it from your Chrome browser, which you can find in the iTunes or Android Market. I may have thought instaGrok was cool before, but its integration into Edmodo is a big win for the platform and the app.  From the instaGrokers:

When a teacher installs instaGrok through Edmodo, their Edmodo class is automatically registered in instaGrok, and shows up in the instaGrok teacher dashboard, allowing them to see students’ activity for their class(es), and view/comment on their journals.

Students in the Edmodo class can submit their journal as an Edmodo assignment, using the Edmodo button on the journal’s toolbar. This brings up a dialog box, prompting them to select one of the assignments their teacher assigned in Edmodo:

What does the back-end view look like for teachers?  Take a look:

See how long a students were using the app, check out their instaGrok journals, what they searched for, where they went, and how they fared on the Grok quizzes.

Does it work on mobile device? Yes, indeed. Here’s instaGrok through Edmodo on my iPad: 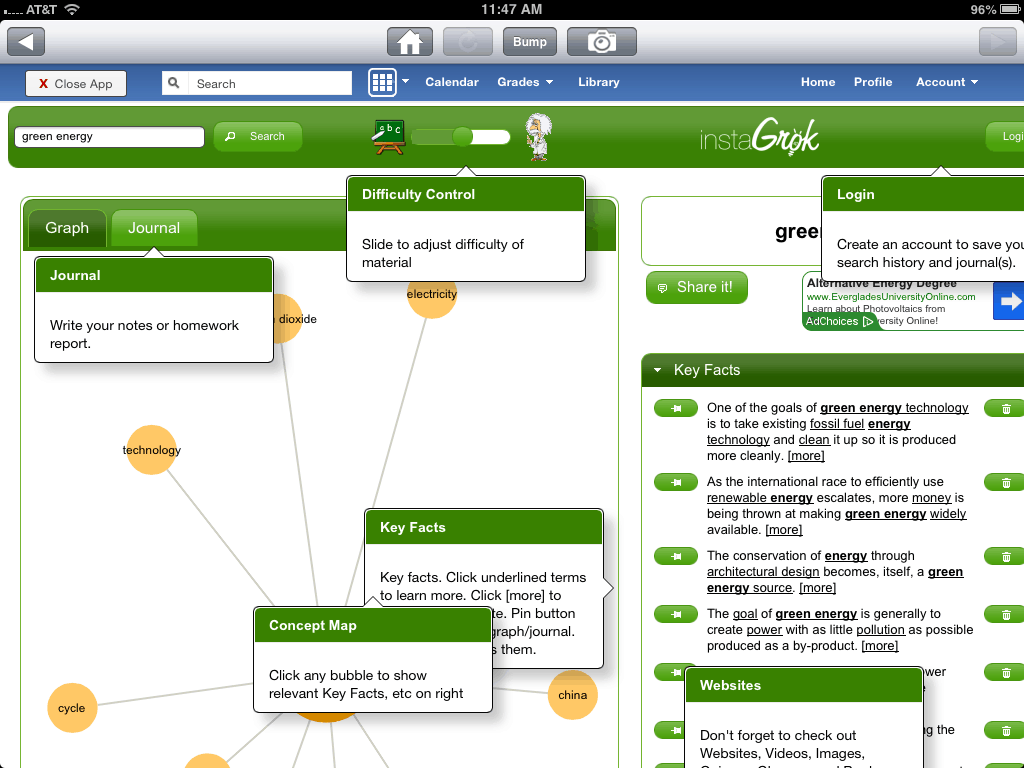 NOT JUST AN OLD-SCHOOL LMS

Be sure to have some fun in your Edmodo account and not “tech-it down” with a lot of Web1.0 links. Explore apps like GoAnimate, Spelling City, Pixton, and Rocketfuel games. Make this a place students want to go to. Don’t repeat the mistakes of the brick-and-mortar classrooms.

Edmodo is parent friendly. Each class comes with a parent code that gives Mom and Dad access to the class. Parents can get notifications and see what their kids are studying in class. Parents, don’t stop there. YOU can also sign up for a free account and become a virtual teacher for your kids, too. If you have “extra” work for them to do, Edmodo is the perfect place to manage it. Push out extra school work, study times or household chores right from Edmodo. It’s a safe Facebook-like platform that you can use from your mobile device. Create your own family badges, too, for rewards.

Now back to my Footloose and Digital Learning Now mix. It’s the story of Ren, son of Ram and Rom (obviously):

A city geek moves to a small town where digital learning and the Internet have been banned, and his rebellious spirit shakes up the old generation.