William Schmidt, Michigan State University, may be the most widely respected math researcher of our time.  He is a member of the National Academy of Education and a fellow of the American Educational Research Association. He has long been a critic of state math standards, “For years now it has been clear that the U.S. mathematics curriculum is a mile wide and an inch deep, and that the fragmented quality of mathematics instruction is related to our low ranking on international assessments.”
Schmidt recently used compared the Common Core State Standards to the standards of other nations.  As he reported in an Education Week, “The common-core math standards closely mirror those of the world’s highest-achieving nations.” And, “If the standards of the world’s top achievers in 8th grade mathematics are any guide, then the common standards represent high-quality standards.”
Schmidt’s international comparisons have identified three key characteristics:

We find three key characteristics in the curricula of the highest-performing countries: coherence (the logical structure that guides students from basic to more advanced material in a systematic way); focus (the push for mastery of a few key concepts at each grade rather than shallow repetition of the same material); and rigor (the level of difficulty at each grade level). The common core adheres to each of these three principles.

Schmidt concludes that. “The common core offers the opportunity to revolutionize math instruction in this country, to improve student performance, to close the gap between the United States and its competitors, and to ensure that every American student has an equal opportunity to learn important mathematics content.”

For related coverage, see this great article in the San Berdardino Sun: Getting to the Core of Education
For more Common Core on Getting Smart, see 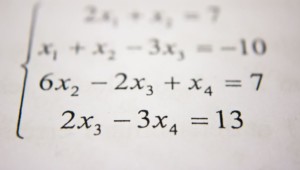 Ensuring Readiness for All Through Math Literacy How to Not “Just Get By” With Remote Learning