As education makes the shift to digital learning, American culture is making a shift too, a shift to the nerd hero. This nerd hero is not like the nerds of the previous generation. The nerd hero is a super charged, networked social beast who can perform miracles in the digital world.
The nerd hero, though, has roamed the American landscape before, some 300 years ago.  You remember them: Jefferson, Franklin, Adams, Madison. All nerds.  Conducting experiments. Testing hypotheses. Understanding methods and correlations. Inventing things. But they were also nerds with influence. (see: Leading a Revolution.) Those Nerds were not just brainiacs, they were also hip and cool. We’ve put images of them on money and washing machines.
But something happened to the Founding Nerd Heroes. Not long after their initial splash, their new nation got all schooled up and developed an education system with a template designed for the masses. The system discourages thinking outside the box, challenging ideas, moving at a different pace, and pursuing areas of special interest.  Oddly, those very traits that best serve adults, actually work against the young student. It’s like we packed young Clark Kent’s lunch with kryptonite.
The nerds kept their pursuits alive, though. Sure, they went underground, avoiding Friday night parties to study in the confines of basements and libraries.  They honed their Clark Kent-like social awkwardness by ducking human dialogue to pursue hobbies in programming and iso-linear chips.  During all that time, though, the nerds were like sleeper agents waiting for the signal to reemerge and dominate the American cultural landscape just like Jefferson and his entourage did.
And then they got what they were waiting for.
The nerds got the Internet.
That event was monumental in the nerd hero movement. They were no longer alone, and the transformation back to nerd hero was underway.  Nerds met online with other like-minded nerds, and just the way that networked computers double, triple, and million-fold their capacities, the nerd hero was born. Imagine five hours a night socializing with other nerd heroes from around the world. Chatrooms, blogs, forums, message boards, gaming rooms, and wikis became their playgrounds.
This social nerd networking turned them into social beasts and produced the twenty-something billionaires. They are a prized demographic for advertisers, markets, and the modern workforce. They are not just at the party, they are the stars with all the snappy answers.
Their influence is real. From Twitter revolutions to Rotten Tomato rankings, from Groupon to Foursquare, they have become the masters on how to both mobilize supporters and marginalize dissenters on issues they value on the Internet.  They are the “super users” and moderators who determine what we’re going to see and what will be for sale!  They invented the Internet’s badge frenzy. They’re not making gaming more like the real world, they’re making the real world more like gaming.
The title “nerd hero” is a badge of honor, held now in the same regard as “athlete” or “rocker” was in another era. The nerd hero holds dominion over the world we live in, a digital world that has ensconced a shrinking non-digital world. Face it, a person might have a bucket under a leaky pipe for a month, but if that wireless mouse malfunctions . . . THAT JUNK WILL BE REPLACED TONIGHT!
Nerd heroes now have virtually every advantage in the world. They have also made many mistakes along the way (see: Illegal Napster), but they managed to fail forward (see: Legit Napster). Their schools, though, continue to be disconnected, both literally and figuratively, from the wired world that they are thriving in. Educators have a lot of catching up to do. They need to not only guide the budding nerd hero, but they also need to ensure that all their students have the same wired access.
The nerd hero influence is far reaching. They have breathed new life into the comic book and graphic novel industry, which is now, apparently, the foundation of all Hollywood films that don’t open at the local art house theater.
I recently went with my kids to see Green Lantern, and here’s the interaction between me and the young nerd hero ticket taker:
Me: “Are you showing any movies NOT based on a comic book?”
Nerd Hero Ticket Taker: “Yeah, go down this hallway, turn right, and don’t stop until you get to 1998.”
See what I mean? Awesome! 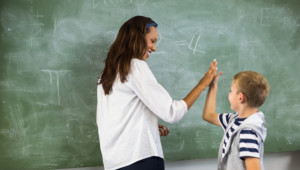