This note comes from Education Sector, which hosted an event that we couldn’t make in Washington, DC early this week. Below is a brief write up of the keynote remarks made by CTO Aneesh Chopra, and a link to the video of the event. Take a look for yourself. It’s a good focus on data in the new education transformation.

Aneesh Chopra, chief technology officer of the United States, started his keynote address at “The Next Decade for Educational Data” event on Tuesday with a sobering reality. He recalled a 2009 study that highlighted the roughly 30 metrics of innovation that could help compare coun tries around the world. At the time of the study, the United States ranked relatively high on the point-in-time measures. But the report also went back a decade to look at the change in the value across each of those metrics. By that standard, the United States ranked dead last — 40th out of 40 countries. “Fast forward to today,” Chopra added, “there is a very similar refrain” to the new PISA scores — the performance is remaining stagnant at a time when other countries continue to make progress. 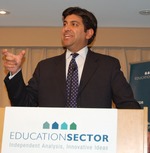 Chopra noted that a continued emphasis on improving education is a key component of President Obama’s innovation strategy, and data has a crucial role in this. He stressed the importance of building out the nation’s digital infrastructure. “We can’t have a conversation about the value of data if you can’t produce the data in the first place.” He also discussed the importance of the reuse of data, as well as privacy as a foundational concern. “It is an absolute must-have in every system we create,” he said.

Chopra concluded by telling the story of his 4-year-old daughter who enjoys playing with educational applications on Chopra’s smart phone. “Yes, she’s having fun, but she is also generating assessment data,” he observed. In the future, data systems may have the ability to bring together this kind of information to add to more formal assessments to create a much more multi-dimensional profile of every learner.

In the discussion that followed, panelists Beverly Donohue of New Visions for Public Schools, Lynn Etheredge of George Washington University’s Rapid Learning Project, Sharren Bates of the Bill & Melinda Gates Foundation, Bror Saxberg of Kaplan, Inc., and Education Sector’s Bill Tucker took Chopra’s words to heart and grappled with the important themes he highlighted. They addressed the notions of inter-operability and reuse of data in education, culture shifts in classrooms across the country to make this work, and lessons learned from other industries, such as health care. The full video of the event is now available on our website; we hope you take a moment to watch it.  |  Watch This Event …