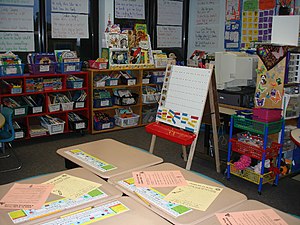 EdReformer features NYC Schools Chancellor Joel Klein’s letter to teacher explaining his support for the public release of value-added teacher performance data.  “In the end, this is about real people. On one hand, for too long, parents have been left out of the equation, left to pray each year that the teacher greeting their children on the first day of school is truly great, but with no real knowledge of whether that is the case, and with no recourse if it’s not.”

Slate asks, what would the best classroom in the world look like? (great read!)

EdWeek’s Election 2010 is a one-stop shop for all governor, school chief and ballot measure information.  Check out their interactive maps!

The Thomas Fordham Institute releases “Cracks in the Ivory Tower? The Views of Education Professors Circa 2010,” which finds that many education professors are generally reform-minded, but they resist some reform efforts like performance-based pay.

Robert Bardwell, a guidance counselor, makes a plea for more guidance counselors in schools in the New York Times, arguing that they can have a dramatic effect in closing the achievement gap.  “The bottom line is that the school counselor of today is not the guidance counselor of yesterday. We are much more, a better and improved model. Give us a chance to prove our worth, and I guarantee our students will be better as a result.”

The RAND Corporation has released a three-volume report, which examines Wallace Foundation-supported efforts in five cities to build systems to improve the quality and accessibility of after-school, summer and other out-of-school time (OST) programs. The study concludes that the fledgling systems, which seek to coordinate the work of major OST players like schools, parks departments, and nonprofit after-school programs, hold some promise.

The writer of a recent New York Times editorial is displeased that the United States ranks 48th out of 133 developed and developing nations in the quality of math and science instruction.

Democrats for Education Reform’s mission is to encourage a more productive dialogue within the Democratic Party on the need to fundamentally reform American public education. Their Hot List candidates are the organization’s top electoral priorities for fall 2010, including EEP signatories Michael Bennet (D-CO) and Bill Ferguson (MD-SD-46).